Specificity is a really important concept to understand in CSS, as it's the mechanism used by the browser to determine which CSS propety declarations get applied to a given element.

In practice, specificity is a multi-leveled weighting system which is determined by the selectors we use to apply a given property. The property with the highest weight wins. When there's a tie, the order of the property definitions is what breaks the tie, with subsequent definitions in the code replacing those that came before.

Different types of selector contribute to the overall specificity score in different ways.

We can think of there being four categories of selector, with each category having a different weight. A selector of a higher weight beats any number of selectors from a lower weight category. We'll return to this idea in a moment.

The lowest level of selector which has an effect on specificity is the type selector. This is when we write things like h1 or p to select elements of a given type.

In cases where we use combinators, such as the descendent combinator, we need to tally up all of the type selectors used in this compound selector. This will give us a total for this component of the specificity score for an element.

For example, if we look at the following selector, we can see that there are three such elements: 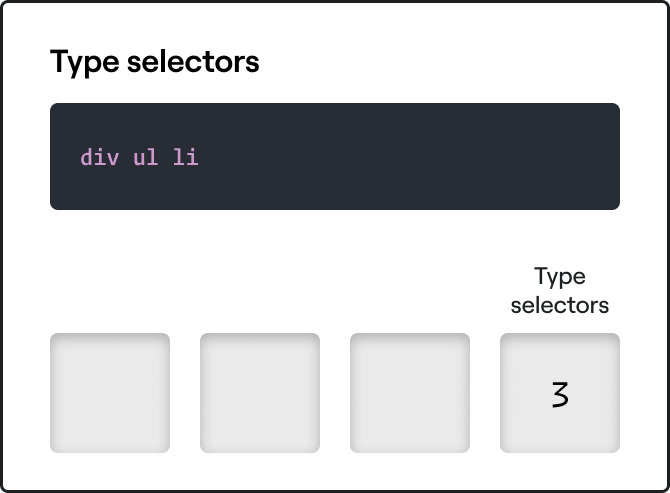 Pseudo-elements such as ::before and ::after count as type selectors for the purposes of calculating specificity.

Class and attribute selectors occupy the next highest category of selector, and therefore have a higher weight than type selectors when it comes to calculating specificity.

Here we're selecting <button> elements which have their type attribute set to "submit". These aren't terribly common selectors, largely because many people don't know they exist, but they can be very powerful in certain situations.

We can use them with or without other selectors, so this is also perfectly valid:

The specificty of these two selectors is different, however.

The first has one attribute selector and one type selector: 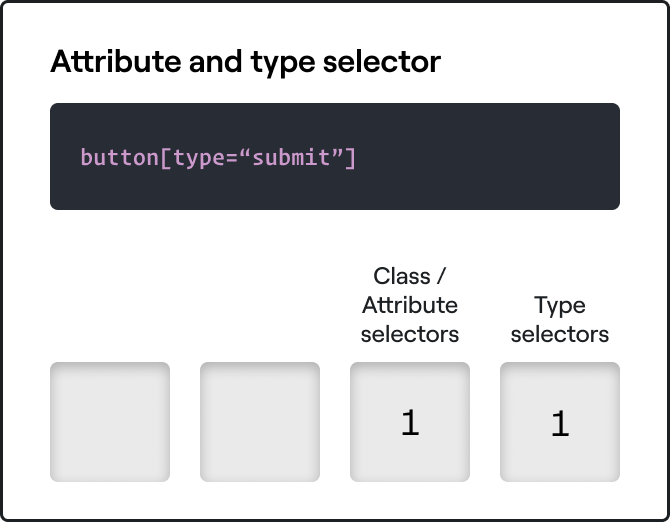 The second has one attribute selector, but no type selectors: 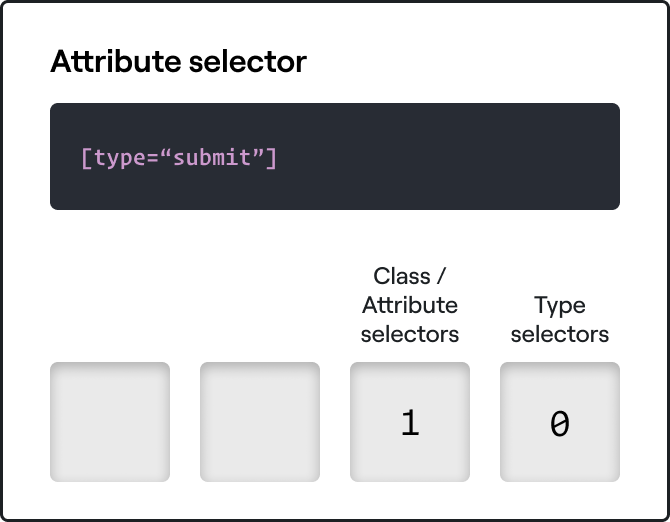 Note, however, that a single class or attribute selector will beat out any number of type selectors. Take the following HTML code, for example:

Let's say we want to access the <li> elements and change the font weight of these elements to 600: a sort of semi-bold value.

Despite there being three type selectors for the second block, and the fact this this block comes later in the code, the .list_item selector is the winner, becuase it's a more specific selector.

While the table for div ul li looks like this: 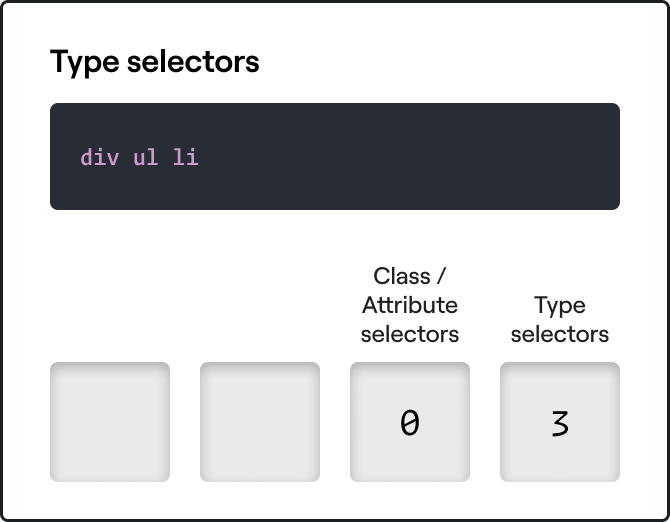 Since selectors belonging to a higher weight category beat out any number of selectors from a lower category, having a single class selector is worth more than 50 type selectors. .list_item is therefore more specific than div ul li, and the font weight of 600 is applied to our <li> elements.

Pseudo-classes such as :hover are considered classes for the purposes of specificity.

There are a few exceptions to this rule such as :not and the new :is pseudo-class. If you're interested, you can read about :is here (opens new window).

Id selectors are considered yet more specific than classes and attribute selectors and occupy a higher specificity category. This makes some sense, since ids are supposed to be unique, so if we use an id selector, we're very specifically targeting one particular element.

In cases where we have two competing id selectors, the class and attributes selectors are considered next, followed by the type selectors. This means that a selector involving an id and a class are considered more specific than those with just an id.

Here the specificity is as follows: 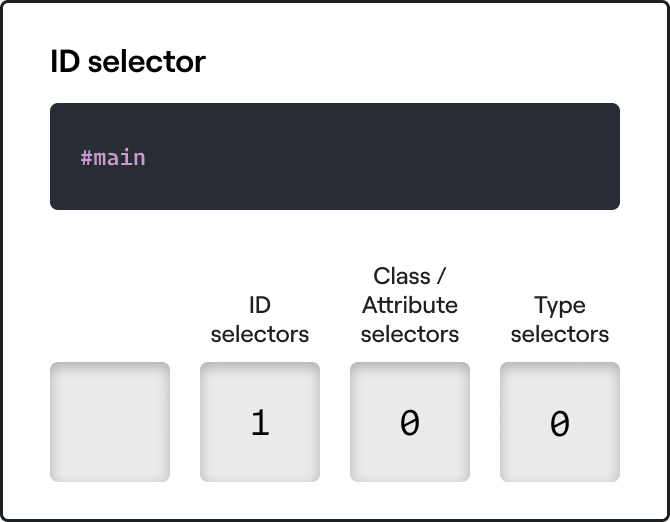 While here the specificity is: 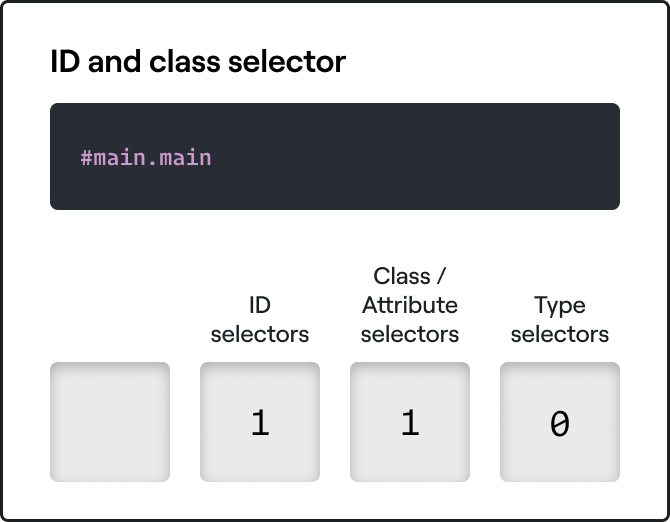 Inline styles have the highest specifity and occupy the final category. Inline styles will overwrite properties defined using any number of id selectors.

Using inline styles is generally a bad idea for a couple of reasons:

Writing !important as part of a property declaration allows us to override the effect of specificity, making sure that a given property value is applied.

For example, in the code below, the <p> text would end up green, even though we've used a far more specific selector to set the text colour to black: 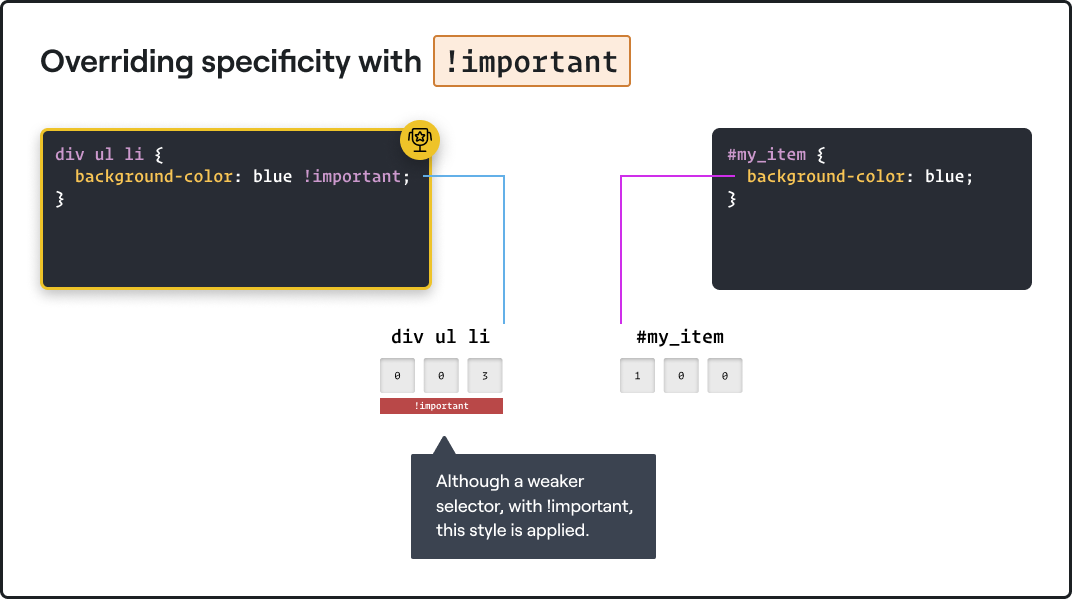 A note on bad practice

While it's important to know about !important, it's a very commonly abused tool, and generally has no place in your CSS code. It can lead to situations where you're not able to overwrite a given property value, and like inline styles, it can be a gateway for further bad practices to creep in.

It's often used as a crutch by developers who don't understand how specificity works, so make sure you learn the concepts of this lecture well, and don't fall into this common trap.

You can find some guidance on when and how to use !important here (opens new window).

When two or more competing styles both make use of !important, how does the browser decide which property to use?

It actually falls back on specificity. This is where many people get stuck with !important, and why it's so vital to learn the concept of specificity well. 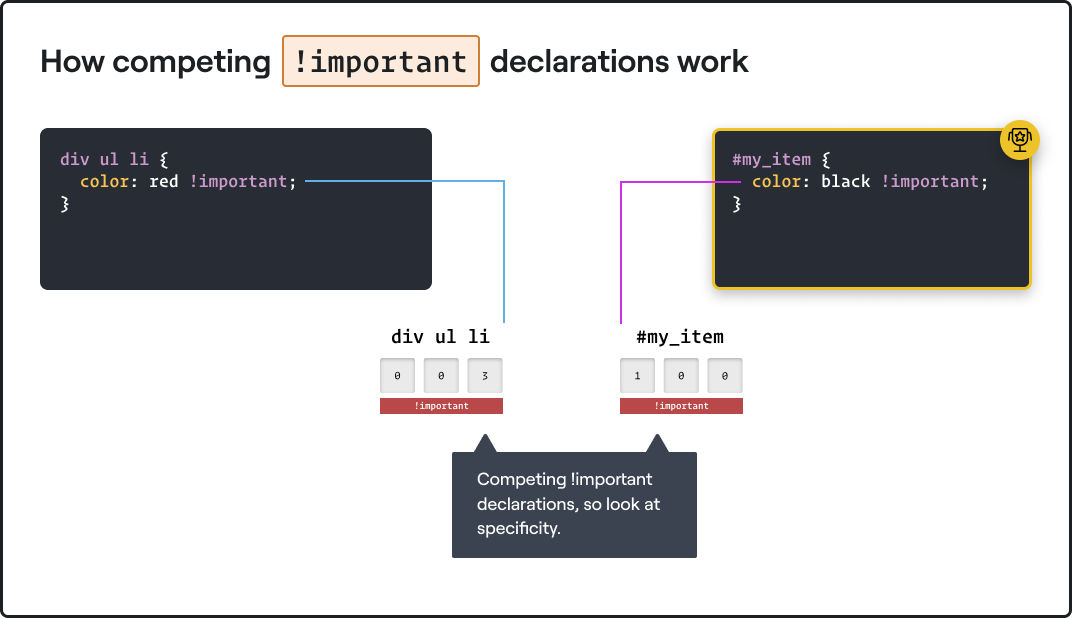 Let's imagine somebody is working on their site, and they can't get a property to work because of specificity reasons, so they add !important to get the style to apply. It works, so as far as they're concerned, they've done a good job.

Now when they want to overwrite this property elsewhere, they might apply !important again, only to find that the style still isn't being applied because the specificity of the original !important declaration is higher.

One selector which we haven't mentioned is *: the universal selector.

* actually has no impact on specificity, so we can think of it as having a specificity lower even than type selectors. Styles defined unde the * selector will only be applied if there are no competing definitions for the same property.