In this lecture we'll be talking about a very important concept in CSS: the box model.

# What is the box model?

The box model is essentially how CSS determines the overall size and shape of an element on the page.

The box model is made up of four components: the content area, the box padding, the box borders, and the box margins. These combine together to create the "box" for a given element.

There are actually two box models in CSS — the standard box model, and the alternative box model — which combine these components in different ways.

Let's start by looking at the standard box model.

When working with the standard box model, the height and width properties for a given element change the size of the content area.

What exactly does this mean?

Let's look at this diagram of the CSS box model below:

As we can see, the content area doesn't include the padding for the element, or the borders, or the margins. This is really important to understand, because it means that if you want something to take up 300px of horizontal space, it's not enough to just set the width to 300px.

Instead, we have to set the width to 300px minus the left and right border width, minus the total horizontal padding.

Let's say our element has a 1px border on all sides, 10px of left padding and 20px of right padding. The code for that might look like this:

If we want out element to be 300px wide, what should the width be set to?

We can go into our developer tools and make sure this all worked correctly. If we hover over the element with the box-example class, we should see a little box pop up which looks like this: 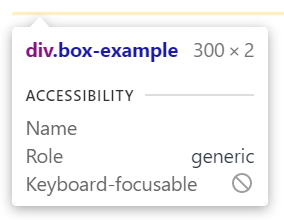 The element has 300px of width, as expected, and 2px of height, due to the top and bottom border.

The margins are not included in this size calculation, so if you set the margin property to, say, 10px, the developer tools will still show you the same measurements.

All of these calculations are really fiddly, and to remedy this, an alternative to the standard box model was introduced.

We can tell CSS to use the alternative box model for a given element by setting the box-sizing property for that element, giving it a value of border-box.

I recommend you use border-box sizing for all of your elements, but unfortunately it's not an inherited property, so we need to be a little clever about how we do this. We don't want to have to manually specify box-sizing for every single element on the page, after all!

What we can do instead, is this:

Some of you may be wondering, why not just do something like this:

There are two main reasons.

The picture we've been painting so far isn't entirely complete, as we've only really discussed the box model for elements being displayed as blocks. For inline elements, the story is a little different.

It's worth spending the time to get familiar with the components of the box model, even if you plan to always set the box-sizing to border-box, as these components are used to determine the effect of other properties.

For example, the background-origin property allows us to determine where the background ends. We can set values like border-box, padding-box, and content-box, which directly map onto the components of the box model we saw before.

You can find more information on the background-origin property here (opens new window).